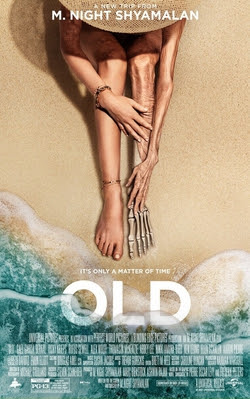 If you’ve read a few of my reviews, you will understand that my first sentence encapsulates the film’s theme or some interesting plot-point in an oblique way usually involving a pun or other perceived witticism: it’s quite fun to write! But this film doesn’t deserve such attention as it fails on every creative and technical level of film making; in straight terms…it stinks! Luis Bunuel did it much better in THE EXTERMINATING ANGEL using an absurd premise as biting social commentary. Shyamalan’s intent seems to be in utilizing the germ of this hypothesis to allow us to consider the big question of ethics in scientific research and its utilitarian principles of the “greater good for the greatest number” by dehumanizing “Big Pharma”. But it’s a non-starter as the story isn’t tightly conceived to ponder such intricate ideals: I find my disbelief unsuspended as young PHD level researchers and medical doctors would murder hundreds of innocent people by sacrificing their Hippocratic Oath in such as fashion. A better script would have examined this moral conflict by focusing upon the researchers themselves, burdened with the moral conundrum of mass murder versus saving masses instead of fixating upon exploiting the victim’s suffering. However, the Nuremberg Code has already answered this medical moral question with finality.

The premise: a group of poorly sketched characters are trapped on a secluded beach and cannot leave. They begin to grow older by the minute and quickly age and physical and mentally deteriorate in 24 hours. Turns out, the mystical beach is used as a research laboratory to test the efficacy of drugs using these sickly human guinea pigs without consent. Time trials for experimental drugs which would normally takes years can be reduced to a few hours. But the inane script changes the rules as it goes so the magical aging effects aren’t consistent and terrifying. For example, they age approximately a year for every half-hour, but their hair and fingernails refuse to grow, fall out or turn gray. A character excuses this with exposition saying it must be because dead cells don’t age…but the biological process still does! It’s a purposeful fallacy perpetuated by such a dumb screenplay because if their hair grew quickly, it would be a dead giveaway and ‘spoil” the reveal. Script-writing at its manipulative worst. Also, I suggest that rapid growth of the children would require inordinate amounts of calories and we barely see them eating at all. Come to think of it, if all their biological processes are hyper-accelerated, they would all starve to death very quickly. Another WTF! inanity is the mention that this is the 73rd Test Group: so, we must believe that over the past few years hundreds of wealthy families disappeared from their environments and not a single one was traced back to this “resort”? There’s a nearly throwaway line of dialogue in the final act when a Tech says that all of the victim’s computers and phones were recovered and scrubbed…as if people didn’t tell friends and family about their vacation before leaving! It’s stupid at face value and becomes more so the longer one thinks about it. I won’t mention the tumor removal surgery which is so foolish it should be quickly forgotten. And the Deus Ex Machina in the form of a notebook in the film’s final moments is a shoddy and lazy plot device that is embarrassing.

But is the film scary? Well, if you suffer from petraphobia and/or aquaphobia you may find this terrifying. Otherwise, lingering shots of jagged rocks and crashing waves will leave you drowsy. Shyamalan confuses fear with violence and when the story slows down, he ramps up the action with a murderous and racist doctor who likes to stab everyone or a woman whose calcium deficiency leads to a laughably pretzelled demise. The tension should be in the buildup and the execution the shock: here he suffers to do either competently. I am now sufficiently convinced (as if THE HAPPENING didn’t already!) that Shyamalan is not a modern-day Hitchcock but more akin to the 21st century Ed Wood.

The actors seem to wrestle with their poorly written dialogue which is more exposition than conversation and fail to reflect the rapid and complex worsening of their mental, spiritual and emotional conditions. The cinematography is awful with bad CGI landscapes where the camera focuses upon rocks for much too long in order to create suspense or dread, I suppose. The CGI aging is also cringe-worthy and the plot points ridiculous. When the 6 year old children age to teenage years in the matter of a few hours and have sex resulting in a quick pregnancy and stillbirth, it was more hilarious than dreadful. The film is also amateurishly framed in 2:39:1 as medium-long shots occasionally cut-off the top of a speaker’s head or only capture someone’s nose at the edge of a composition. This may have been the fault of the projectionist which would make more sense as I can’t believe such inept camerawork could pass through undetected (or uncared for) by the DP.

One thing is certain, you will grow 148 minutes older while watching this film but it will feel like 148 years.