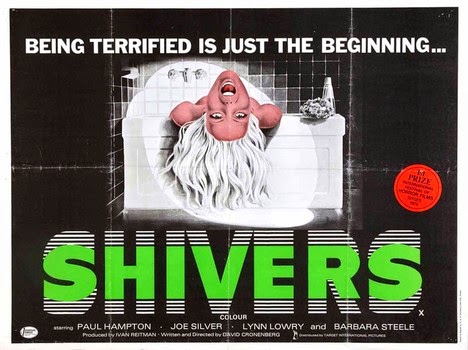 SHIVERS or THE 120 HOURS OF SODOM
A nasty parasite infects the residents of an upscale apartment complex and spreads its carnal disease by physical contact. David Cronenberg’s first feature film is a modernist rendering of Pasolini’s SALO as human beings are defiled and degraded, reduced to nothing less than insect-like impulses.
The plot concerns Dr. Emil Hobbes (that’s Devil in Old English) who is experimenting with parasites to replace diseased organs in transplant patients. He soon discovers an unusual side effect in that the patient develops an insatiable sexual craving that dominates their every physical action. Soon the entire population of an upscale apartment complex is infected and the resident doctor and his nurse must fight for their own survival.
SHIVERS is definitely rough around the edges in form and function though it begins to reveal Cronenberg’s early fascination with body-horror in both its physical and philosophical implications. The film begins as a slide show to prospective renters of an upscale condominium block that has its own on-call Doctor, convenience store, and 9-hole golf course. We’re then presented with a young couple who is supposed to meet with Dr. Hobbes before signing the rental agreement. It’s obvious that Cronenberg had trouble with the first act of the story and strengthened this weak narrative pace with cross-cutting during the editing process. As the couple sits down to talk with the manager we are shown a Doctor (presumably Hobbes) struggling with a teenage girl (presumably in an apartment somewhere upstairs). The couple’s vapid dialogue and standard questions are cut between Dr. Hobbes strangling the girl and cutting open her abdomen before he pours acid into her body. He then slits his own throat. The couple’s meeting is never resolved as Cronenberg then edits rather clumsily to a police investigation of the murdered girl: a detective is interviewing Dr. St. Luc (a cohort and the resident Doctor) in the room as both bodies are being removed. The narrative’s perspective now belongs to Dr. St. Luc and his nurse Ms. Forsythe and their discoveries and reactions in this violent microcosm.
Cronenberg is strongly influenced by SALO and even depicts two girls tethered to dog leashes, an iconic image from Pasolini’s classic film. In SALO, the victims are held against their will and degraded and tortured into submission for the thrill of powerful men. It makes a volatile political statement against Italy’s Fascist history and the rape of its citizens by men who held absolute power. But Cronenberg shifts the blame squarely upon Dr. Hobbes and his corrupt medical ethics as his experiment results in a social disease spread by bodily contact. Many people are infected against their will and become slave to the intent of the parasitic host. The idea is very interesting but Cronenberg loses focus on the narrative details to depict some gruesome special effects. It soon becomes maddening that the there is no cohesiveness or consistency attributed to the parasites or their effects. Some infected victims “turn” immediately and others take hours for the parasite to control. Other times the creature burns the skin of the victim and other times it just slithers into an available orifice without affect. This inconsistency seems to be under the Director’s control as he just decides what looks grossest for that particular shot. Cronenberg fails to investigate the morality that he originally presents via exposition in an earlier dialogue and submits to the “gross-out”.
Other problems plague the film which can be attributed to a Director who is learning his craft. The acting of the two leads is rather bland and undefined. Paul Hampton portrays Dr. St. Luc and he is anything but convincing as a Doctor of Medicine. He doesn’t speak or act like a Doctor especially when he must treat an injured victim. Hampton is too withdrawn and almost invisible in his performance and should at least use a few medical terms to show that he is indeed competent. Lynn Lowry as Nurse Forsythe is much worse as she even looks disgusted when faced with a serious burn injury and begins to wrap the wound clumsily. Cronenberg should have had the actors do some research into trauma response before principle photography began so this fault is shared with the Director. The gruesome special effects may be low budget but get high grades for the creepiness and gross-out realism! The problem in SHIVERS is that Cronenberg sacrifices story continuity for the shocking effect. What’s frustrating is that with better writing he could have had the best of both worlds.
SHIVERS ends with the good Dr. being chased down and drowned in an orgy of copulation. It’s an eerie image of groping and frenzied people of all ages engaging in bi-sexuality to satiate their sexual appetites, stalking their prey like wild animals. The final scene of the infected driving away from the underground garage and into the Montreal night is chilling as this deadly venereal disease in unleashed upon an unsuspecting world. Sex does indeed become violence.
Final Grade: (C)
Posted by Alex DeLarge at 6:13 PM