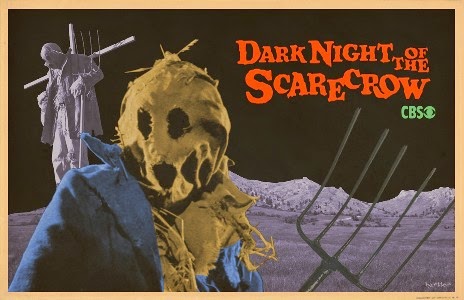 Four men seek Justice outside the Rule of Law but soon learn they must pay restitution with their own flesh, blood and bone. Director Frank De Filetta proposes a simple tale of lex talionis but imbues this made-for-TV with a vicious energy and subtext while framing compositions as if this was meant for the big screen.
The plot concerns Bubba a mentally handicapped man who has befriended Marylee, a bright and intelligent little girl. When she is attacked and mauled by a dog, four men jump to the conclusion that Bubba has molested her and hunt him down. Bubba tries to escape but is found dressed as a scarecrow hiding in plain sight. The four men murder him as he hangs upon the “cross” in the rags with a sack over his head. When the men are cleared of charges, they meet their demise one by one. But who is behind this retributive Justice? Is it Bubba’s elderly mother? The county DA who believes in their guilt even though he can’t prove it? Is it the little girl?
Though the film wears its heart on its sleeve, so to speak, there is a nasty undercurrent for those who listen carefully and look for metaphor: some things just cannot be said on network TV! The first scene shows Bubba and Marylee sitting in a field playing a game. Bubba crushes a flower by mistake and almost cries. He carefully finds another and presents it to her. This act will bookend the film and is touching and endearing, holding some scintilla of beauty in a dirty desperate world of adults. Marylee has made a Hawaiian necklace of flowers, or Lei as she rightly calls it. She puts it over Bubba’s head and wants to kiss him on the cheek. He’s shy but finally allows her, and she gives him an innocent peck on the cheek which is all very childish and friendly.
Cut to: the Postman, who vehemently complains that Bubba has been seen with a child again, and exclaims “what are we gonna do about it”. This sets the story up nicely since TV narratives must be told in fifteen minute increments. But we’re already feeling the anxiety of the townsfolk. The little girl and Bubba playing with a “Lei” can be read phonetically: lay, as in sexual intercourse. The kiss on the cheek denotes a sexual attraction. Why is the Postman so angry? Has Bubba ever harmed another child? As the story unfolds and it is discovered that Bubba was benign, we begin to wonder about this Postman and his accusations. Bubba’s mother even mentions as much in a heated argument with the Postman. Even his scene with Marylee in the school corridor with her dressed up as an adult with lipstick and makeup sexualizes her and ends in her being chased by him. The specter of Pedophilia haunts this story as much as the ghostly scarecrow. How’s that for early 80’s Prime Time entertainment!
Director Frank De Filetta films in a decidedly cinematic style with crane shots, slow zooms and tracking shots without relying too much upon close-ups and quick editing. Since the story must break every 15 minutes or so for commercials, De Filetta paces the story with extraordinary patience by building suspense and leaving a cliffhanger which often remains unresolved after the intermission. His sense of humor is blackly beautiful as he utilizes one of the greatest match-cuts in TV history: after one of the victims is ground-up in a wood chipper he cuts from the spinning blades to a dollop of cherry jam on a breakfast platter. It’s laugh-out-loud wonderful and makes one a bit queasy at the same time!
I cannot praise the acting enough as it fits the narrative perfectly and balances the suspense and empathetic link towards the violent resolution. Though the characters are not delineated with backstories, each must be quickly understood within the paradigm of the story. This often leads to leaden caricature or campy and cartoonish overacting. Not so in this film. The acting is top notch from the humble mentally challenged victim to the virulent antagonist in the local Post Master. Charles Durning steals the film as the bigoted Otis Hazelrigg and tears through his scenes with fury and professional competence. He is despicable but fully human as Durning never allows his character to fall into debased stereotype. The other actors in the conspiracy are also strong and believable which makes their murder even worse: these are real people who have made a fatal decision and must live with it. Only they need not worry too much as they won’t live long!
DARK NIGHT OF THE SCARECROW keeps one guessing even as each conspirator is murdered in a grisly fashion. Well, grisly enough for TV as little blood is actually shown. Surprisingly, when Bubba is shot we do get a look in medium shot at the leaking bullet holes torn through his costume. A mundane or Earth-bound explanation could explain each and every killing up until the very end. Even as Hazelrigg looks into the black shadowy recesses of his killer’s mask he cannot believe in the supernatural. It’s when the little girl is offered a pretty flower, this time not accidently smooshed that the final answer is delivered with a new promise: she’ll teach her friend a new trick called “the hiding game”. And that’s the most chilling treat of all!
Final Grade: (A)
Posted by Alex DeLarge at 7:04 AM