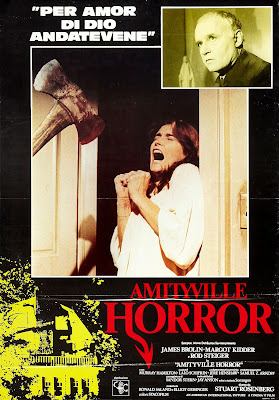 George Lutz is tormented by an unruly spirit that haunts the corridors of his new home and the convolutions of his mind. Director Stuart Rosenberg adapts the infamous novel (supposedly based on a true story) concerning the Lutz family’s paranormal experiences in their new home and their flight 28 days later. But the real horror is not the metaphysical but the metaphor: the illusion of tranquility and the Church’s impotence in recognizing the deadly sin of domestic violence.

This classic film relies on suspense and ambiguity as it builds towards a supernatural tempest, beginning and ending on a dark and stormy night. The first scenes depict the brutal murders of the previous owners, the son possessed by the demon of mental illness, his shotgun echoing nature’s fury. A year later, a nervous Realtor shows the house to the newly married George and Kathy Lutz. Rosenberg crosscuts the present with the violent past, showing an empty room one moment and a bloody tangle of hair the next, as if the past seeps through time like congealed blood, its stain never completely gone.

The film almost transcends the constraints of genre tropes but falls victim to its own devices: the dénouement becomes a sticky morass of supernatural gibberish, offering clichéd pronouncements of ancient Indian burial grounds and gates of Hell. But the film works in the first two acts, laying the groundwork for a seething patriarchal conflict as George inherits Kathy’s ready-made family and the baggage that comes along with it. The mystical events are minimized and can be explained by the prosaic: Father Delaney is divorced from his family and suffers a physiological breakdown, hearing voices and hysterical blindness the outward manifestation of his guilt; the swarm of flies even in winter is not necessarily the result of the Lord of Flies; toilets overflowing with dirty water is not uncommon with antiquated plumbing; phones often have bad connections; and children do have imaginary friends. It’s when people begin talking in tongues about the gates of Hell and George discovers the red room with its pit of gore that the yarn unravels.

The film can be read as the slow descent from the honeymoon of domestic bliss into violence as George becomes more and more aggressive. He controls Kathy and the children by abusing them emotionally, then apologizing and asking for forgiveness: a common tactic with abusers that is like reeling-in and letting-out the line, so the hook sinks in deeper. It’s not long before his anger becomes a weapon, his dark eyes betraying the lurking demon within. Kathy reaches out for help to the Church but remains unable to make a good connection, as the Father is blind to her needs. And the police only remain bystanders, never intervening in the familial tumult: they are only there to clean up the mess afterwards.

Lalo Schifrin’s score is the real star of this movie, evoking Bernard Herrmann’s raging Psycho strings, which adds to the thickly charged atmosphere. Silence also allows the buzzing of insects or the creaking bones of an old house to dominate a scene for great effect. Lalo Schifrin was nominated for an Academy Award for his work, and this remains one of the great horror film soundtracks.

A scientist's reason battles superstition, his life as fragile as parchment, his rock solid skepticism soon broken like the jagged te... 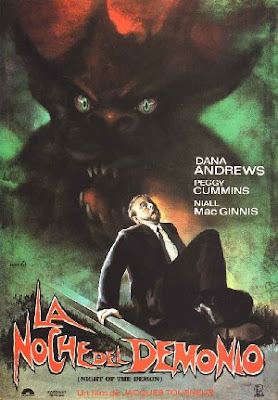