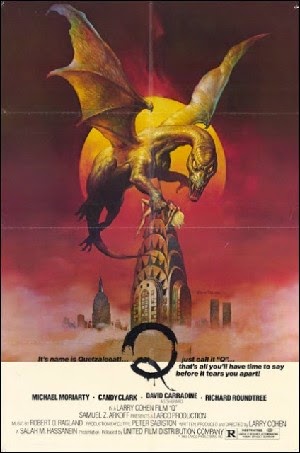 Jimmy Quinn, a small time crook discovers that in order to make easy money one must break a few eggs. Larry Cohen’s giant monster movie places an Aztec god in the center of New York City and structures the story as a police procedural. It’s an interesting concept as Detective Shepard (David Carradine) develops a duel investigation because he links a serial killer who commits ritual sacrifices to the winged serpent who is devouring innocent victims. Of course, Shepard falls victim to politics as the mayor is only concerned with finding the monster and killing it and fails to consider the ritual motive.
Director Larry Cohen is used to working with small budgets and here it is effectively on display. He often shoots from the monster’s POV so he doesn’t have to reveal the creature. Cohen also allows only a quick glimpse into its open mouth or its shadow upon a skyscraper. After one attack which we barely glimpse, he shows pedestrians walking below being showered with blood from the corpse as it is carried away. These effects are rather affective but when the payoff comes it is rather disappointing as it looks like a poorly sculpted foam & rubber figure: believe me, this is not Ray Harryhausen! He films on location throughout the city and this gives the story a certain gravitas. It certainly was the right decision because the faux-reality of studio filming would have made this film unwatchable. Cohen is able to generate some suspense and a few jump-scares but suspends it all after revealing the monster’s location. It then focuses upon Jimmy Quinn and his get-rich-quick scheme and the story becomes shrill and overbearing.
Michael Moriarity really steals the film out from under the latex creation and is the star of the film. As Jimmy Quinn, he twists and turns with nervous energy and grins like a shark. The problem with his performance is that he becomes annoying and unlikable. While anti-heroes can be the focal point of a story they must adhere to one rule only: they must be interesting. Quinn starts out as interesting but falls into stereotype. Meanwhile David Carradine sleepwalks through the movie and is not only uninteresting but even more sinful: boring. Aside from Moriarity, the entire cast phoned in their performances!
Cohen tries to jump-start the final act with a machine-gun battle from the top of the Chrysler building (alluding to the grand finale of KING KONG) but the SPFX aren’t up to the task. The final shot of an undiscovered nest with egg in another part of town is the final payoff and as it cracks open the camera zooms into its inky blackness.
Q is good for a few scares and laughs but is not one of Cohen’s more imaginative endeavors...but it does have its charm.
Final Grade: (C)
Posted by Alex DeLarge at 6:10 PM