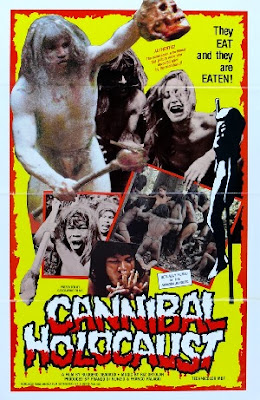 Our world of steel and glass, of choking fumes and crush of people synonymous with the Green Inferno: both are jungles of violent beauty, hunting grounds where we satiate our never-ending appetite for destruction. This tragic exploitation film is a caustic indictment of modernity, depicting civilization as the antagonist, the invader whose presence conjures the specter of Death to prey upon the indigenous peoples of the Amazon. It is also a bitter critique of the Documentary, as scenes are staged, a set-up that passes the simulacra of verity through violent manipulation; through slick editing, a film that will pronounce its blatant lies as truth for an audience that revels in its visceral impact, a society weaned on violence and gore, which does indeed eat its own kind.
The film’s low budget, stock acting and convulsive point-of-view cinematography adds an element of authenticity. The bloody special effects are shocking; in context, making the deaths very convincing. But the film ultimately consumes itself, like a starving man whose very existence is dependent upon cannibalizing his own body: the equilibrium will eventually skew towards self-destruction. Director Ruggero Deodato has the makings of an interesting and thought provoking film; a social commentary buried under the canopy of the thick jungle, but can’t separate exploitation from scrupulousness. He eviscerates live animals for his horror show and lets the camera linger over the slimy entrails, taking sadistic pleasure in the suffering of live creatures. But I admit this brutality is nothing new to the cinema: Coppola’s APOCALYPSE NOW, Haneke’s CACHE, Klimov’s COME AND SEE are a few modern masterpieces that kill live animals for effect…and generate little controversy. But CANNIBAL HOLOCAUST seems to go too far, the killings only create a gut wrenching vomitus expungement, as your gorge rises, its acidic tendrils caressing the palate. Juxtaposed with the fake murders, I must admit it does add a crimson patina to the film that helps reflect a genuine flare of homicide.
Deodato fails to point out the irony of his own film which capitalizes on the very morality it condemns. The film is structured as an investigation of the lost ‘Dream Team” of Documentary filmmakers, young guns who strutted into the Amazon never to return. The story is told from the perspective of Anthropologist Harold Monroe, a man hired to trek into the Green Inferno and find out the truth about the missing crew. The very first problem with the story is that Harold Monroe acts and speaks nothing like a scientist: he’s more like comic relief to the tough guy role of Chaco, his guide. If that can be overlooked, the heart of the film itself is corrupt. Deodato wants to have his corpse and eat it too! That is, he uses Monroe as a cipher to condemn the actions of the guide as Chaco uses brute force against the indigenous peoples yet Monroe himself becomes part of the problem. He belittles and demeans these tribesmen with “magic” (a radio) to get what he wants: the missing crew’s film canisters. These canisters a worshiped as part of a totem placed before their village. No Anthropologist would commit such a despicable act (or go on this mission in the first place).
Monroe eventually takes the film back to New York City and develops the moving pictures. What he discovers is dreadful: the film crew was raping and pillaging the tribesman in order to make a more exciting documentary: the power is in the editing. As Monroe curses their atrocious behavior and the Producers who are considering releasing it as a documentary, Deodato fails to make the final step towards irony. If the film were self-reflexive, acknowledging its own pretense as a fictional creation by having Monroe speak directly to the audience by breaking the fourth wall, then the message would become crystal clear. As the morality of the filmmakers within Deodato’s film becomes more and more hellish then Monroe could be used as an avatar to speak Deodato’s mind, to directly relate to the audience watching his film and have them consider their own reasons for watching a film called CANNIBAL HOLOCAUST. But Deodato isn't that savvy and, as it stands, his film becomes that which it condemns as Deodato himself abuses real indigenous people to tell his story and eviscerates living animals to make a point.


Ultimately, I cannot recommend a film where actual suffering is food for the thoughtless, a recipe for consumerism.
Final Cut: (F)
Posted by Alex DeLarge at 2:54 PM 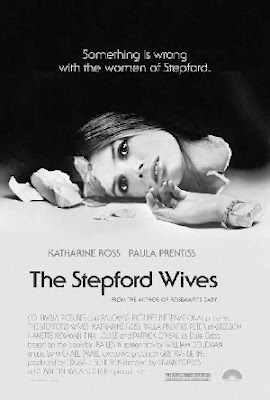