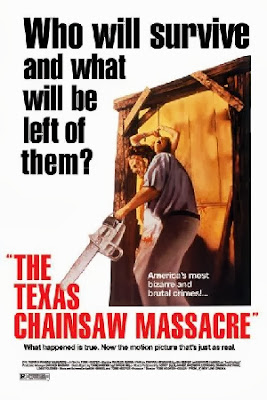 Flash bulbs burst the dark curtain revealing sickening glimpses of death, the remains of unearthed corpses, and twisted, rotting, putrid reminders of our own mortality. The foreground narration overlaps these quicksilver images with an off-camera voice: a newsman repeating the top story about grave robbers and other atrocities in a listless matter-of-fact manner. The film establishes this horrific dichotomy in the very first few minutes blurring the boundaries of what we accept as normal; the chainsaw’s edge that separates madness and the mundane.

Cut to: five friends traveling to a cemetery to check on a relative’s remains, cramped together like cattle unknowingly on their way to the slaughter. Franklin is crippled, bound to a wheelchair and is a metaphor for the audience who are bound to their seats by impulse and unable to escape. Tobe Hooper brings the camera in for close-ups, confining the characters to a coffin-like hermetic space inside the van. The tension quickly mounts when they pick up a hitchhiker who proves to be rather mentally unbalanced. The girls are reading an astrology magazine while Franklin and the stranger discuss their work in a slaughterhouse, foreshadowing the fate of our five protagonists. This stranger acts out some bizarre ritual by cutting himself and burning Franklin’s photograph, then marking the van with a bloody sigil as they speed away. Their future is written in blood as the Age of Aquarius is over now subsumed by Saturn, the devourer of kindred flesh. Fate takes them to a rural filling station conveniently out of gas. They drive a short distance to Franklin’s boyhood haunt which is now a decaying shell whose timbers are exposed like broken bones. Here in the sweltering heat of Texas you can go home again…you just can never leave.
Now Hooper opens up the frame and gives us some medium long shots to establish their isolation as the smothering darkness settles upon them. TEXAS CHAINSAW MASSACRE is a film with little blood or gore but the masterful editing convinces us that we see more then is actually shown! One by one, they find their way to a charnel house and become victim to a psychopath in a mask of dried human skin. They become dinner to a family of cannibals. Here, the Patriarchal family is a byproduct of industrialization, adapt at wielding the killing blow in a manner more accurate and satisfying than a machine. Sally is the last survivor and is sadistically tortured; slashed and gouged while grandpa suckles her blood in an orgy of repressed sexuality. The gallows humor is quite “heavy-handed” as the old man tries to bash her head in but it brings an awkward laugh as does the family’s backwoods caricature.
Sally escapes and the final scene of her bloodied face and hysterical laugh is chilling. We cut to black with the killer’s gasoline powered Danse Macabre contrasted against the sunrise. The film’s minimal score adds an eerie sublime quality as the chainsaw’s deafening roar becomes its epitaph.