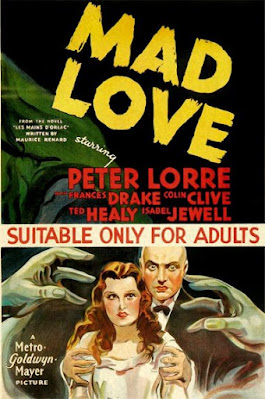 Dr. Gogol is obsessed with “Grand Dame Guignol” Madame Orlac, who is branded every evening in a sadistic display of cathartic revelry; a man who falls victim to his own power of suggestion. Karl Freund directs this classic tale of transplanted hands and murderous obsession with the help of legendary Cinematographer Greg Toland, whose low-key lighting and slightly askew compositions help visualize this powerful parable of vengeance and poetic justice. The acting is first rate too, as Peter Lorre, in his first American film, imbues his villain with both Pathos and Thanatos, a man whose own wax-like features and soft monotone voice rarely display the cruel intent scheming in his brain. His bland visage doesn’t give away his innermost impulses except in the widening of his huge eyes, or a slight smirk at the corner of his lips. In one scene, he and his assistant are bent over a crippled child who is about to undergo an experimental surgery; Dr. Gogol warmly pats the child on the hand and comforts her, yet his attention is quickly torn away and we see, for a moment, beneath the thin veneer of compassion and witness the monster under the mask. It’s to Lorre’s credit that we both hate his character and feel pity for him too. I can’t say enough for his performance! It’s one of the best in this early cycle of Horror films. Colin Clive as Stephen Orlac (in a reverse Frankenstein role) is solid as the concert pianist and husband whose hands are mangled and replaced with the hands of a knife-throwing killer; his weathered face and hunched shoulders are both kind and sad and it’s easy to commiserate with his plight. Frances Drake is the beautiful and faithful wife Yvonne Orlac whose fierce spirit fuels the film. Though her character is stuck in the patriarchal tempo of the period, she quits acting to further his career, after all, she is intelligent and independent, making decisions and taking control of the relationship in a supporting way. I suppose that’s one of the key choices I like about this horror film: we have a husband and wife who are mutually supportive of each other instead of an entitled and emotionally domineering husband. It’s not Stephen Orlac who is cruel to be kind! And last but not least, May Beatty as the bad Dr’s good housekeeper practically steals the film with her drunken shenanigans and flighty cockatoo! She is the comic relief valve for the horrific narrative that must have surprised audiences of the time: damn, the film even warns the audience to leave the theatre before the opening credits begin!

The plot is pure (almost) Pre-Code craziness: Dr. Gogol grafts a murderer’s hands upon concert pianist Stephen Orlac who then becomes a better knife-thrower than musician. Of course, Gogol suffers mad love for Mrs. Orlac and even buys her wax statue which was displayed at the theatre where she performed. Like the sea-nymph Galatea, he imbues her static figure with his own displaced imagination and wishes her to life; he gets his wish in a way that even he can’t comprehend! But even that isn’t the craziest plot element: Gogol disguises himself in a leather and steel neck brace with mechanical appendages and convinces Stephen that he (Gogol) is the beheaded murderer whose hands have been removed and are now attached to Stephan. This suggestive mind-fuck spirals the pianist into despair and convinces him he must have killed his father (which is a frame-up by the Dr.) Director Karl Freund was recognized as one of the great DPs at the time and his direction combined with Toland’s skill make the looming close-ups veer towards insanity. Watch closely as focus is pulled while Gogol leans ever so slightly towards the camera in an extreme close-up. It’s unsettling on a large screen! Or the dolly to extreme close-up. MAD LOVE is one of the great horror films of the New Deal decade and it should rightfully be recognized as such beyond its cult status.

1. A rite believed to be a means of or visible form of grace, especially. From one addiction to another, a group of lost souls buil... 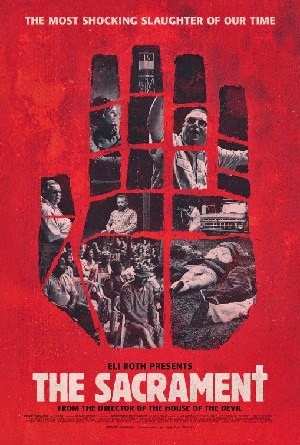